admin
Let’s start with the most exciting news this week: The new Toyota Supra has been spied!

We have spied the Supra before, but this time is a little different because it has shed some camouflage so we can finally have a better look at what it will look like when it finally arrives. Thankfully, it looks a lot like the amazing FT-1 concept that got us so excited for the Supra in the first place.

But the Supra wasn’t the only thing that was spied this week, photographers also caught the new Corvette ZR1 roaming around.

The track-ready ZR1 is expected to debut at the upcoming Detroit auto show with more than 700 horsepower. From these photos, the biggest changes we can see are aerodynamic enhancements and - spolier alert - there is also a giant wing that will help the supercar killer stick to the track.

Next up, Volkswagen is taking a break from its SUVs to bring us a new four-door called the Arteon.

Volkswagen has released a video previewing its new fastback sedan and it looks pretty luxurious. The automaker is calling this a four-door coupe and it will likely debut at the Geneva Motor show in March to replace the CC.

And one of Italy’s lesser known automakers has come out with an even more powerful version of its supercar.

The Mazzanti Evantra 771 just debuted, and just like its name signifies, it will have 771 horsepower. Like the regular Evantra it’s based on, the 771 is powered by 7.0-liter naturally aspirated V8 engine, but this one has been boosted for better performance. Regular Evantras can also be upgraded.

Out last news story this week isn’t as exciting as an Italian supercar, but it is significant. The next generation Ford Fiesta has debuted.

Calling it the “World’s most technologically advanced small car,” the new-generation Fiesta will arrive here as a 2018 model year car with more driver assistant and safety features, better infotainment and even a jacked up mini crossover version. More details will be available closer to launch. 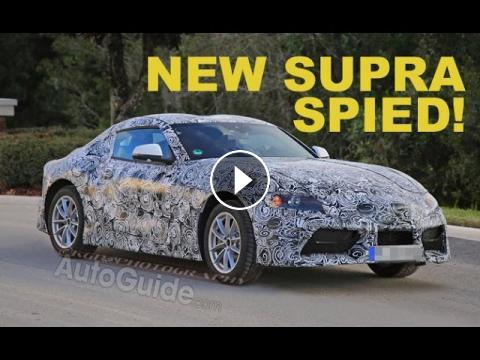 Let’s start with the most exciting news this week: The new Toyota Supra has been spied! We have spied the Supra before, but this time is a little diff...