admin
This first official work week after the holidays has been a ridiculously busy one for auto news. With the CES happening and with the Detroit Auto Show just around the corner, we have a lot to tell you about. We’ll have separate Detroit preview video, so we’ll focus on other news in this roundup.

The biggest news this week came from Faraday Future, the mysterious electric automaker that seemed to come out of nowhere. This week, they finally came out with its first production car. Called the FF91, it’s making all sorts of wild, Tesla-beating claims. It claims it’s faster, has more range, more power and more connectivity than the Tesla Model S P100D. It will supposedly arrive in 2018, but people are still pretty skeptical that Faraday Future will be able to deliver.

The biggest fanboy car ever has just been refreshed! The Subaru WRX and STI get tweaks for the 2018 model year that makes it much better, although there is still no hatchback model.

The popular sport compacts get a few new style updates and the power stays the same, but they do get important performance upgrades like revised suspension tuning for better handling, better brakes, a smoother and more natural power steering setup, and tweaked all-wheel-drive system. The interior is also nicer and quieter now and the cars get new safety features.

Also this week, we heard some crazy rumors that the upcoming Honda Civic Type R would be available with a CVT, but we’ve since confirmed that this is thankfully not true.

CVTs actually aren’t that bad these days, but the Type R has only been available with a manual in its entire history, so we were pretty skeptical when we heard these rumors of a CVT. What was even more surprising to enthusiasts though wasn’t actually the prospect of an automatic, but the fact that it wouldn’t be a dual clutch transmission. We have since confirmed with a Honda official that the Type R, which is coming to North America for the first time ever, will not come with a CVT, but a six-speed manual.

One of the most interesting news to come out this week was confirmation from Ford that a hybrid Mustang and F-150 will be coming in 2020.

Although it’s a bit controversial among enthusiasts to have a hybrid muscle car and pickup truck, it is pretty much inevitable as emissions rules get more and more strict. Ford also said that it will release 13 electrified or hybrid vehicles in the next five years including a small fully electric SUV with 300 miles of range.

And a quick roundup of other interesting news, after years of rumors, a Pagani Huayra Roadster was just confirmed to debut at the Geneva Motor Show. Toyota also came out with a new concept that wants to have an emotional connection with its passengers, which is kind of weird, and BMW came out with a concept they’re calling a sculpture to demonstrate its autonomous driving technology.

Don’t forget to subscribe so you never miss one of our news updates. We’ll also be reporting live from the Detroit Auto Show next week, so stay tuned for all the latest coverage of the new car and concept debuts. 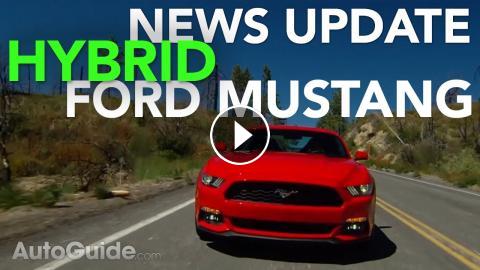 This first official work week after the holidays has been a ridiculously busy one for auto news. With the CES happening and with the Detroit Auto Show...