admin
As if the Mercedes G-Wagen wasn’t extreme enough, Maybach has sprinkled even more craziness on the iconic SUV. The Mercedes-Maybach G 650 Landaulet is a powered by a biturbo V12 outputs a ridiculous 630 horsepower and 738 pound-feet of torque. Being a Landaulet basically means that only the rear passengers get to enjoy the convertible soft top. Although it’s built for off-roading, it’s pretty safe to say that sunbathing will be its main purpose. The back seats are the same ones used in the S-Class meaning they have footrests and can recline fully and massage so rear passengers can work on their tan in full comfort while being entertained by two rear-seat entertainment systems. Only 99 units of this limited edition off-roader will be built and it will make its public debut at the Geneva Motor Show.

Ferrari pulled a surprise this week too and unveiled a new car that we weren’t supposed to see until the Geneva Motor Show. Ferrari has just unveiled its latest supercar, and the Italian automaker says it is the “the most powerful and fastest Ferrari in the marque’s history.”
Besides a dramatic redesign, the Ferrari 812 Superfast is also said to have the brand’s final naturally aspirated V12. The car builds on the F12berlinetta and F12tdf and is powered by a 6.5-liter V12 that outputs about 789 horsepower at a ridiculously high 8,500 rpm and 525 pound-feet of torque at 7,000 rpm, 80 percent of which is available at 3,500 rpm. Four-wheel steering has been added to increase low-speed maneuverability as well as high-speed stability and responsiveness. All told, the Ferrari 812 Superfast will rocket to 62 mph in 2.9 seconds — the same time as a LaFerrari — onto a top speed of more than 211 mph.

Also this week, we learned a lot about Aston Martin’s upcoming hypercar and we even got a chance to see it in person. The Toronto Auto Show rarely gets anything cool, but the Aston Martin AM-RB 001 made its North American debut in Canada. At the show, Aston CEO Andy Palmer revealed to us that it will be renamed when it finally goes into production and that the hypercar foreshadows a follow-up mid-engine supercar from the British brand. He told us that the hypercar will help rocket the brand into Ferrari territory and help change the public’s perception.

Surprisingly, we also have some more news from the Toronto Auto Show, which has never in its history has a global debut until now. The fifth-generation 2018 Hyundai Accent debuted in Toronto with a mature new look and a load of features. Although the powertrain hasn’t really been changed, Hyundai has upgraded the chassis, suspension, transmission and steering and is promising a better driving dynamics. With its 1.6-liter four-cylinder engine producing 132 horsepower and 119 pound-feet of torque, It actually gets slightly less power than before, but it does get a better torque curve, which will make highway passing much easier. Compared to the old Accent, the new sedan and hatch are wider and longer, though height remains the same. When it arrives, it will have a ton of features all while still being pretty affordable. The 2018 Hyundai Accent will arrive as a sedan model in the last quarter of 2017 and a hatchback model will follow in early 2018. Pricing hasn’t been announced yet, but Hyundai promises it will have “unbeatable value.”

And finally, AutoGuide.com has announced that the winner of the 2017 Truck of the Year is the new Ford F-150 Raptor. Saying that the Raptor is the whole package, AutoGuide.com trucks expert Steve Elmer said that the pickup was “capable, intelligent, and most of all, an incredible amount of fun.” The Raptor won over the 2017 Toyota Tacoma TRD Pro, Honda Ridgeline, Ford F-250, Nissan Titan because it was the best-all-round package and it was so much fun off-road. Its 3.5-liter EcoBoost V6 pulled strong with and without a trailer and the new 10-speed transmission handled everything smoothly. Add to all that it’s under-$50,000 price tag and the Raptor is also a performance bargain. 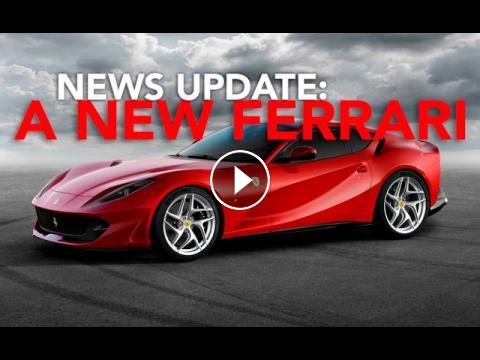 As if the Mercedes G-Wagen wasn’t extreme enough, Maybach has sprinkled even more craziness on the iconic SUV. The Mercedes-Maybach G 650 Landaulet is...