The Lamborghini Aventador S was unveiled this week, and it’s the next-generation of the V12 supercar that has an increased focus on aerodynamics. The biggest changes are a more aggressive front end, two new air ducts in the front bumper and new rear diffuser, and an active rear wing with three positions: it all adds up to more downforce where you need it and less drag where you don’t. The 6.5-liter V12 engine has also been upgraded for an increased 40 horsepower for a total of 740 and 509 pound-feet of torque. Deliveries begin in spring of 2017, with pricing in the US starting at just over $421,000 dollars.

It seems Ferrari wants to end the year on a high note: A little while ago, a mystery yellow Ferrari was spotted and no one really knew what it was, but Ferrari has officially cleared up the confusion. It has a complicated name, but the Ferrari SP 275 RW Competizione is based on the F12 berlinetta but has the upgraded V12 engine and gearbox from the limited edition F12tdf. The one-off supercar pays homage to the classic 275 GTB from the 1960s and won LeMans in 1965. We have no idea why Ferrari built it, but we’re not complaining.

Audi is teasing a new SUV that will debut at the Detroit Auto Show in a few weeks. They unveiled two sketches of the Q8 e-Tron concept, which it calls a “near-production study.” When it comes out, the Q8 will be the biggest SUV Audi offers, and will have similar powertrains to the Q7. But because it has the e-tron name, we can also expect some type of electrified powertrain or a hybrid too. It looks pretty imposing with a big grille and a coupe-like profile, but we hope it doesn’t look bloated like other so-called coupe SUVs out there.

In some news from the other side of the Volkswagen empire, they have finally reached an agreement on how to compensate owners of cars with the 3.0-liter TDI engine that’s mostly found in Audi and Porsche SUVs. Volkswagen has set aside $1-billion to buy back the older vehicles and fix the newer ones with the diesel-cheating software, as well as pay any related fines to the US government. We’re still expecting some more details, but so far, most of the news about the settlement has been about the 2.0-liter four-cylinder engine.

BMW has introduced a new 5 Series model that is actually faster than the current M5. The first ever BMW M550i xDrive is the fastest 5 Series to date with a zero-to-60 mph time under 4.0 seconds, making it faster than the current standard BMW M5 that does the sprint in 4.4 seconds. It’s powered by a 4.4-liter twin-turbo V8 engine and delivers 456 horsepower and 480 pound-feet of torque and sends power to all four wheels via an eight-speed automatic. The new car is heading to the U.S. in spring 2017. 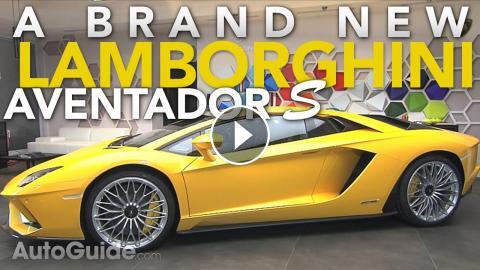