Raef - Call On Him | "The Path" Album | Official Lyric Video

-------------------------
About Raef:
Born in Washington DC and raised in Maryland, Raef has shared his music with faith-based communities across the world. In the early 2000s, he sang tenor in a college a cappella group and played his acoustic guitar at local coffee shops. Raef was introduced to the national stage after his trio rock-band "Great Seneca" toured the United States as part of the "Voices for Change" initiative. Shortly afterwards, Raef joined the "Poetic Vision Tour" - a band of traveling musicians and poets dedicated to inspiring a spiritual and cultural renewal. More recently, Raef started working with Awakening Records and in 2014 released his debut album "The Path" , a collection of songs that reflects his identity as an American Muslim and his journey throughout the years.
---
Connect with Raef:
Official Website: http://www.RaefMusic.com
Official YouTube: http://www.facebook.com/RaefMusic
Official Twitter: http://twitter.com/RaefMusic
Official Instagram: http://instagram.com/RaefMusic

All night I pray I might,
Wake up and feel the light
Before I know it, the Sun has arrived
It greets me with its cheerful eyes

I'm thankful for this beautiful day
It feels so good to be on my way
I see the world there's nothing to hide,
And in His name everything's alright!

All day, I'm paving my way
Because I know, I'm not here to stay
Straight ahead, there's so much to see
And I'll be making history
I'm grateful for whatever has passed
He only stays, and nothing will last
Just how it ends is unknown to me
but in His shade is where I'll want to be

Just take a step and open your eyes
Put your trust in Him and it'll be alright
Just right when you:

Raef - Call On Him | "The Path" Album | Official Lyric Video 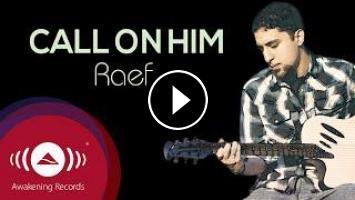 Raef - Call On Him | "The Path" Album Official lyric video). From his debut album "The Path". Watch "The Path" album Pla...