RECIPE:
Step 1 – Preparing the Ingredients
1- First, let’s clean the shrimp. Cut the heads. Squeeze the bottom of the shrimp and gently press to remove the tail. Peel the rest of the shell.
Lay the shrimp down and run your paring knife along the back. Do not cut too deep.
Pull out the thing gray vein.
And here you have clean shrimp!
Don’t forget to keep 4 shrimp whole for decoration.
2- Thinly slice the shallots.
3- Grate the garlic cloves.
4- Remove mushroom stems and thinly slice the mushroom caps

Step 3 – Preparing the Pasta
1- In a large pot, pour water and a large pinch of salt. Bring to a boiling point then add the tagliatelle. Follow the cooking instructions on your pasta package. Usually it takes 10-12 minutes to cook tagliatelle.
2- Once done, remove the tagliatelle from the water and add them to the cream sauce. If you want a thicker sauce, you can add a bit of pasta water… the starch in the water will act as a glue!
3- Plate your pasta and top with chopped cilantro, freshly grated parmesan, and whole shrimp!
Bon appetite! 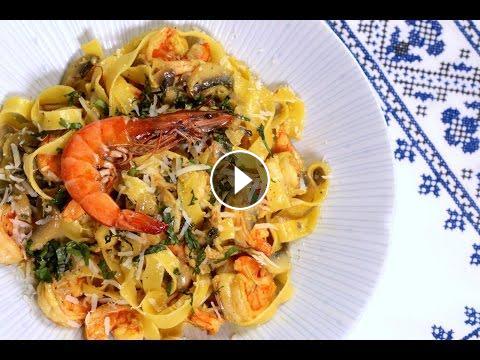